Dedicated to Porky Chedwick, Lou Christie wrote the foreword for "Rock and Roll," which was just released this month. The book features more than 325 photos of the artists who rocked the area during its heyday jammed into its 256 pages. You'll get all the big names you'd expect, from the Del Vikings to the Silencers, and quite a few that you'll have to dig deep into the memory banks to recall, like Frankie Czuri, Johnny Jack, the Fenways, the Mon-Vales, Donnybrooks, Blenders, Windsors, Royaltones and Baldwin's Four Seasons among many more acts.

Ed explained the spectrum by telling Scott Mervis of the Post Gazette that “Rock ’n’ roll was not just made by major artists. It was made by the artists that played at the school dances, that played locally in clubs, that had records on the radio stations in Pittsburgh side by side with the Beatles and Elvis. They were just as important to people in Pittsburgh as those artists who made it nationally.”

Salamon comes by his love of Pittsburgh music honestly. He grew up in Brookline, and like many kids of his his era, had his radio tuned to Porky and hit all the teen clubs and hops. Ed was even a guitarist for a local band, the Headliners. He started in the music profession at KDKA radio in 1970 and moved on to WEEP before his career took him to New York. He formed The United Stations Radio Network in 1981 with Dick Clark and became the president of programming for Westwood One in 1993. Today, he's based in Nashville with several industry irons in the fire.

We'd be a little surprised if you missed the release; Ed was here for the "Pittsburgh Rockin' Reunion," had a story in the Post Gazette and has been interviewed by just about all the local radio stations. But the next couple of promotions may be worth circling on the calendar.
Ed is turning his book signings into events; along with his John Hancock, there will be an opening band and panel of 'Burg music elite, free and open to the public:

Before each meeting of the minds, the event will kick off with be an acapella performance by the Dantes, whose “Top Down Time” and "How Many Times" were local hits in the mid-sixties, and just maybe a mystery guest or two featured in the book will pop up. 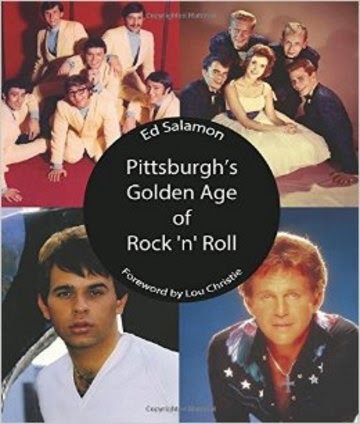 Ed told us that the book is available on Amazon.com and other online book sellers, including BarnesandNoble.com. If you can't wait, Barnes and Noble at Settlers Ridge, Attic Records in Millvale, Johnny Angel’s Ginchy Stuff in Brighton Heights and the University of Pittsburgh Book Store in Oakland have the paperback in stock.
Posted by Ron Ieraci at 10:01 PM

He started in the music profession at KDKA radio in 1970 and moved on to WEEP before his career took him to New York. cd review

Pittsburgh has a long tradition as a town that likes to kick up its' heels and make a joyful noise. We want to highlight the acts, people, and places that made the town sing & swing through the years, from current musicians to Stephen Foster. If you have a thought to share or an idea for us, give a yell to: Old Mon Music.