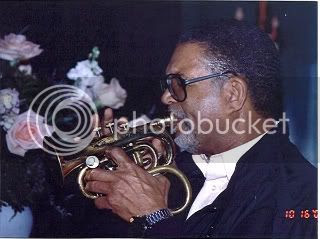 Doctor Nelson Harrison
Hey, last week we featured one of the great jazz teachers and performers in Pittsburgh, Dr. Nathan Davis, a Kansas City transplant. Today we're sticking with the professional day job theme, but our guy is as Pittsburgh as the Steelers - Dr. Nelson Harrison.

He was born and raised in the East End. His schooling was at Crescent Elementary, Baxter Junior High, Westinghouse High (where he's a member of the Wall of Fame), and the University of Pittsburgh.

Dr. Harrison, now 69, began his musical career at the age of 13 as a trombonist and bandleader for the Beethoven Bebops 7-piece jazz/dance combo. At the same time, he played for the Junior Pittsburgh Symphony and the Pittsburgh Youth Symphony.

As a Bulldog, he took private trombone lessons under Carl G. McVicker, Sr., the famous band teacher at the 'House, and Matthew Shiner of Duquesne University in the late fifties.

Don't let the classical background fool ya; Harrison didn't end up a longhair by any means. Since the early 1960's, he's gigged with local jazz and R & B groups.

He started playing with bands like the Joe Westray Orchestra, Sonny Gilmer and the Premiers, the Walt Harper Quintet (he recorded "Live at the Attic" with them in 1969), and the Nathan Davis Quintet (he recorded "Makatuka" in 1970 and "Suite for Dr. Martin Luther King, Jr." in 1971 with Davis).

He also played shows with Nelson Riddle and the Pittsburgh Symphony Pops and for several Civic Light Opera productions, along with shows with Marvin Hamlisch and the Preservation Hall Jazz Band in New Orleans (and North Side). What, no KISS?

He's still active in the local club scene. Harrison sits with the Roger Humphries Big Band, Spirit on the Hill, The Blues Orphans, Bill Dell & Wee Jams, Swing Fever, Gary Rican & the Studio-E Band, The Hard Groove Project, and his own bands The World According to Bop, Jazz ‘N Jive, Blue to the Bone, Nelson Harrison & Associates, and Dr. Jazz & the Salty Dawgs. From doo-wop to dixieland, the Doctor has a place to play what he feels.

Harrison has had his share of studio time lately. Recordings he's on from the past few years include "Tuesday Night at James Street" with the RH Factor; "Don’t Give Up" with the Roger Humphries Big Band; "Moonlit River" with songs by Fred Moolten; "21st-Century Musicism" featuring compositions by Karlton E. Hester; "If I Can’t Dance, It’s Not My Revolution" with folkie Anne Feeney; "Schism ‘n Blues" & "Root Rot" with the americana Blues Orphans; and "Not from Concentrate" & "Harmonique" with Genie Walker.

In fact, he expanded his wings for a while. Nelson gained a wide reputation as a New Orleans-style, Dixieland pianist when he tickled the keys with the Boilermaker Jazz Band from 1991-98. The band hit the international jazz festival circuit, and he's on four albums with them, "On A Coconut Island," "Don't Give Up the Ship," "Burgundy Street Blues," and "Honky Tonk Town."

He might be best known, though, for playing with the Count Basie Orchestra between 1978-81, touring the US and Japan with vocalists Joe Williams, Sarah Vaughan, Helen Humes, Joe Turner, Eddie Vinson, and Dennis Rowland. He's on their LP "Kansas City Shout."

But hey, idle hands and all...and Harrison's never been accused of having a pair of those. He charts arrangements for local groups and recording sessions, written over 300 original compositions spanning the full range of jazz, pop, fusion, rock, jingles, blues, ballads and kiddie songs. Harrison's the lyricist for 125 published bop tunes, too, by last count.

He produced an original score for the road show of August Wilson's Pulitzer Prize winning "Ma Rainey's Black Bottom," for the Kuntu Repertory Theatre in 1987. Other scores of his are featured in movies by Georg Sanford Brown and John Russo, and plays by Richard Wright and Rob Penny.

Harrison was the musical director for WQED-TV's award winning "Black Horizons Show," and the on-air host of "Jazz Pittsburgh," an hour-long National Public Radio series produced by WDUQ-FM. He appeared in the TV movie "The Temptations," and is featured on Science and the Outer Streams, a live web cast on "The Metaphysics of Music."

In addition, he's a contributing partner with the Afro-Centric curriculum for jazz and the "Living Encyclopedia of Global African Music" that includes a Pittsburgh Jazz Legacy project as a component.

He's the founder and online host of The Pittsburgh Jazz Network, a web-based who's who of Pittsburgh boppers.

Harrison formed the first All-City High School Jazz Orchestra for the
Manchester Craftsmen’s Guild. He organized an international cultural exchange tour in Pittsburgh and Texas for the Krakow Youth Jazz Ensemble. The doc has had a hand in putting together segments of the Three Rivers Art Festival and Mellon Jazz Festival.

The good doctor has enough honors to strain a fair-sized high school trophy case, including the East Liberty Gallery of Stars, the Walt Harper All That Jazz Award, the Legacy Arts Project Keepers of the Flame Award, the Manchester Craftsmen Guild Jazz Pittsburgh Legends of Jazz Award, and his latest, this year's African American Council on the Arts Rob Penny Lifetime Achievement Award.

And as a side bar, he's an inventor, too. He come up with the horn he's now famed for blowing, the "Trombetto from the Ghetto," as he calls it. It's a brass piece with four valves that plays a range of six octaves with a trombone mouthpiece. The instrument is kinda a cross between a French Horn and a Flugelhorn, and looks like a burnished pretzel.

Did we mention his day job? Dr. Nelson Harrison received his Ph.D. in clinical psychology from the University of Pittsburgh in 1974. Along with delivering his musical chops, he's also a college lecturer, business consultant and in-demand speaker on “The Creative Mind” and “The Metaphysics of Music.”

As Doctor Harrison said "A mentor once told me that a person needs a profession and a trade. Art is my trade and psychology has been my profession. I can boldly say that every scientific theory I was taught through Ph.D. level has since been proven wrong. Art is never wrong. Music is...my metaphor for life." Amen.

A very talented soul that has blessed the Pgh area with a brilliant musical gift as well as a beautiful love of life.

He is all that, Bert. Pittsburgh has been blessed by Dr. Harrison and many other musicians with the human touch.

Pittsburgh has a long tradition as a town that likes to kick up its' heels and make a joyful noise. We want to highlight the acts, people, and places that made the town sing & swing through the years, from current musicians to Stephen Foster. If you have a thought to share or an idea for us, give a yell to: Old Mon Music.